Written by Sumit Chaturvedi | Published on: October 21, 2016
For all the 22 years of his young life, Ajith (name changed to protect identity) has had to hide his sexual preference for male partners. The management graduate, who works at a hotel in Chennai, comes from Kambam, a small Tamil Nadu village. Participants attend a gay pride parade, to promote gay, lesbian, bisexual and transgender rights, in Mumbai. A recent study found that of 8,549 men with alternate sexual identities, 14% have faced some kind of emotional violence, 8.9% sexual violence and 9% physical violence.

Ajith’s parents and younger sister are aware of his sexual orientation but he fears the abuse, attacks and ridicule he would have to face in Kambam as an openly gay man. But in Chennai, where he is less secretive about his orientation, he said, he feels much safer thanks to the support of the community organisations (COs) for men with alternate sexual identities.

A recent survey conducted across five Indian states by Swasti Health Resource Centre for 12 such COs has proved him right: gay men who seek peer support were far safer than those living with their parents, most often without outing themselves. The aim of the study was to get a better understanding of the profiles and needs of those who approach the COs for help.
Living with parents, afraid to seek help

More than half of all men who face physical violence (52.4%), sexual abuse (55%) and emotional torture (46.5%) were still living with their parents and mostly in the closet, according to the survey. The attackers, it turned out, are most often strangers, clients (in the case of male sex workers) and goons.

The likely reason for this is that it is tougher for men living with their families to seek peer support from other homosexuals. In contrast, the study found that those living with long/short-term partners or peers face very little violence. 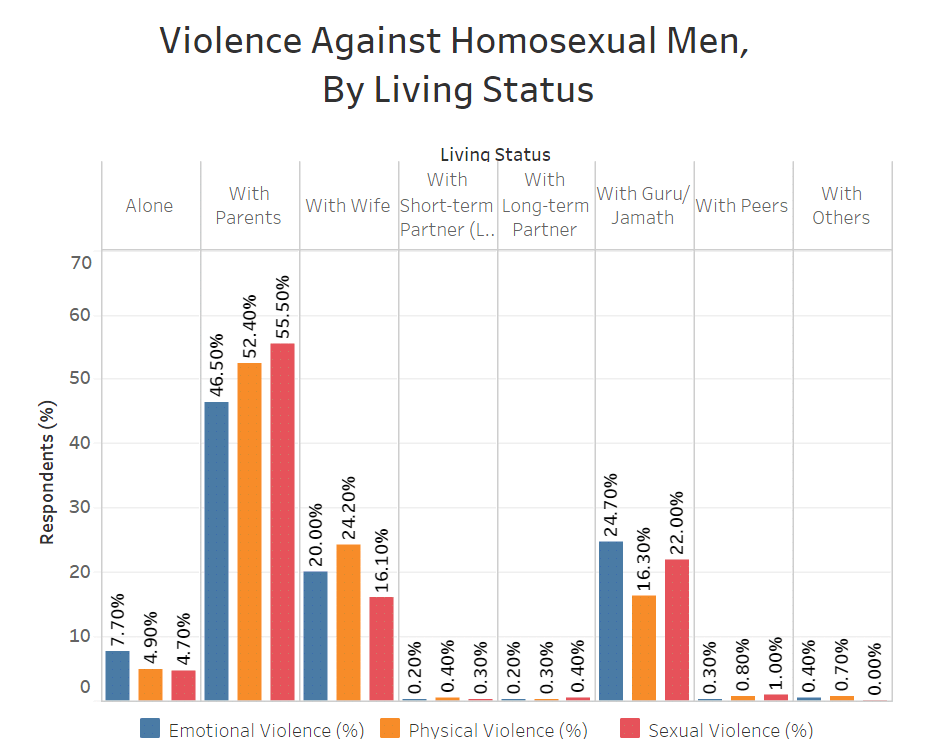 The study conducted between April and October, 2015, covered Tamil Nadu, Maharashtra, Andhra Pradesh, Telangana and Karnataka. It found that of 8,549 respondents, 14% have faced some kind of emotional violence, 8.9% sexual violence and 9% physical violence. 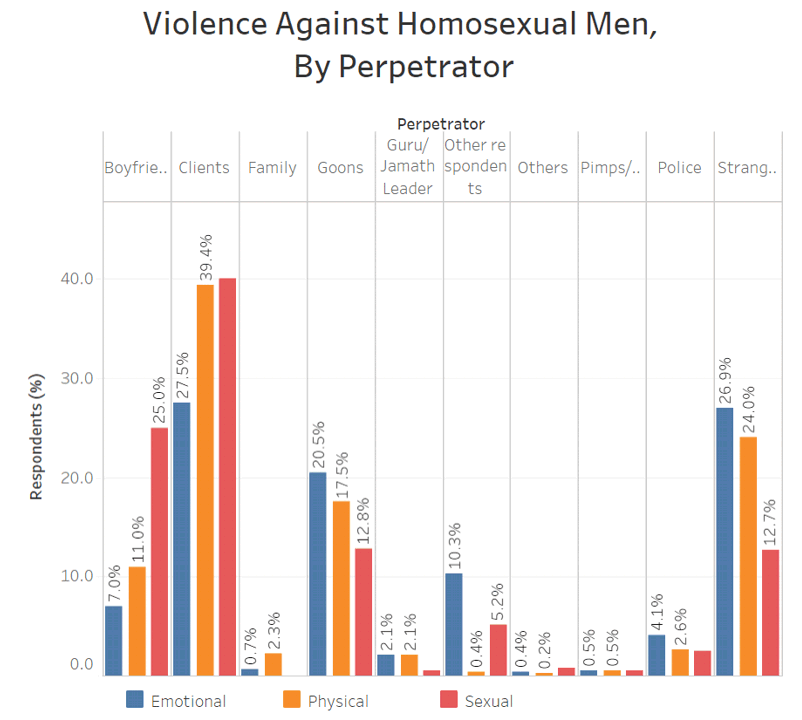 In many families, there is severe pressure on gay men to marry. The survey found that 8.9% of respondents were married and 42.5% were separated.

There are an estimated 3.1 million men who prefer sex with men in India, according to the United Nations General Assembly Special Session on HIV/AIDS Report. HIV prevalence among this group in the country is 14.5%, according to this 2011 working paper by the Global Commission on Law and HIV.

Criminalisation of homosexuality makes it tougher for homosexual men to seek medical help for sexually transmitted infections (STIs). “Repressive legal contexts and pervasive social stigma can limit access for these men to appropriate services for STIs and HIV, including prevention, treatment and can even be life threatening,” the global commission’s working paper said. After being decriminalised by the Delhi High Court in 2009, homosexuality wasre-criminalised in India by the Supreme Court in 2013.

On October 5, 2016, the union cabinet ratified the 2014 HIV/AIDS (Prevention and Control) Bill at a meeting chaired by Prime Minister Narendra Modi. The long-awaited bill seeks to prohibit discrimination against persons with HIV and AIDS. But, as human rights lawyer Deya Bhattacharya wrote in her piece in Firstpost, “the bill does not elucidate on the legal dissonance between its provisions of non-discrimination and other acts and case-law that discriminate against sex-workers, homosexuals and transgenders”.

For men engaged in sex work, especially those with a high client load, the study found that the danger of violence is multiplied.

However, low income from sex work results in even higher prevalence of STI symptoms. Similarly, men with lower weekly client load (four or less) reported higher STI prevalence (8.3%) than those who dealt with more clients (4.3%). This could be because the lesser the men earn in total–from all work including sex work–the less likely they are to undergo testing for STIs/HIV.

Men who face violence are most likely (41.3%) to not report if it is physical, less likely (39.8%) if it is sexual and least likely (32.4%) if it is emotional. Ajith said that, in Chennai, it is easier to seek police protection against violence through COs than as an individual.

“We can reach out to the network when violence occurs. If I am standing at a bus stop and if cops come to inquire, we can call our CO for help,” he said.

The study showed that COs provide a strong support system for respondents engaged in sex work and other professions. A total of 6,482 men or 75% are registered with COs. Most cases reported to COs relate to emotional violence (51%).

(Chaturvedi is an Independent Media Consultant with Swasti Health Resource Centre, Bangalore and a blogger at OpinionTandoor.in.)

This article was first published on India Spend