The Musalmans and a United Nation-India 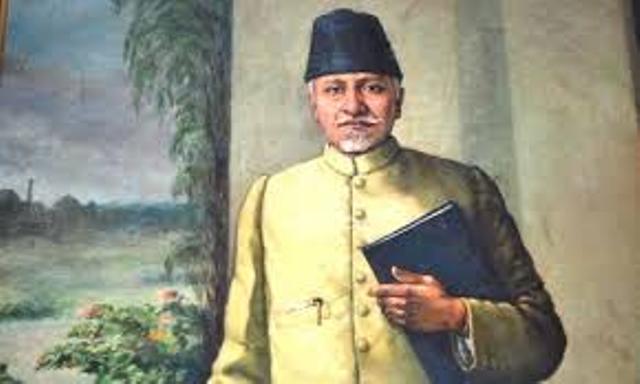 Today, November 11 is the 128th Birth Anniversary of Maulana Azad. In 1992 he was posthumously awarded India's highest civilian award, the Bharat Ratna. He was 70 years when he passed away on February 22, 1958.

Maulana Abul Kalam Azad was twice elected President of the Indian National Congress, in 1923 and again in 1940. This excerpt from his historic address made at the Ramgarh Session of the grand old party are soul searching on the observations on the minorities and the syncretic fusion of religions on the sub-continent. The rest of the address may be read here.

“In 1923 you elected me President of this National Assembly. For the second time, after seventeen years, you have once again conferred upon me the same honour. Seventeen years is not a long period in the history of national struggles. But now the pace of events and world change is so rapid that our old standards no longer apply. During these last seventeen years we have passed through many stages, one after another. We had a long journey before us, and it was inevitable that we should pass through several stages.

“We rested at many a point no doubt, but never stopped. We surveyed and examined every prospect; but we were not ensnared by it, and passed on. We faced many ups and downs, but always our faces were turned towards the goal. The world may have doubted nur intentions and determination, but we never had a moment's doubt. Our path was full of difficulties, and at every step we were faced with great obstacles. It may be that we did not proceed as rapidly as we desired, but we did not flinch from marching forward.

“If we look back upon the period between 1923 and 1940, 1923 will appear to us a faded landmark in the distance. In 1923 we desired to reach our goal; but the goal was so distant then that even the milestones were hidden from our eyes. Raise your eyes today and look ahead. Not only do you see the milestones clearly, but the goal itself is not distant. But this is evident: that nearer we get to the goal, the more intense does our struggle become. Although the rapid march of events has taken us farther from our old landmark and brought us nearer our goal, yet it has created new troubles and difficulties for us. Today our caravan is passing a very critical stage. The essential difficulty of such a critical period lies in its conflicting possibilities. It is very probable that a correct step may bring us very near our goal; and on the other hand, a false step may land us in fresh troubles and difficulties.

“At such a critical juncture you have elected me President, and thus demonstrated the great confidence you have in one of your co-workers. It is a great honour and a great responsibility. I am grateful for the honour, and crave your support in shouldering the responsibility. I am confident that the fulness of your confidence in me will be a measure of the fulness of the support that I shall continue to receive.

“I am a Musalman and am proud of that fact. Islam's splendid traditions of thirteen hundred years are my inheritance. I am unwilling to lose even the smallest part of this inheritance. The teaching and history of Islam, its arts and letters and civilisation, are my wealth and my fortune. It is my duty to protect them.

“As a Musalman I have a special interest in Islamic religion and culture, and I cannot tolerate any interference with them. But in addition to these sentiments, I have others also which the realities and conditions of my life have forced upon me. The spirit of Islam does not come in the way of these sentiments; it guides and helps me forward.

“I am proud of being an Indian. I am a part of the indivisible unity that is Indian nationality. I am indispensable to this noble edifice, and without me this splendid structure of India is incomplete. I am an essential element which has gone to build India. I can never surrender this claim.

“It was India's historic destiny that many human races and cultures and religions should flow to her, finding a home in her hospitable soil, and that many a caravan should find rest here. Even before the dawn of history, these caravans trekked into India, and wave after wave of newcomers followed. This vast and fertile land gave welcome to all, and took them to her bosom. One of the last of these caravans, following the footsteps of its predecessors, was that of the followers of Islam. This came here and settled here for good.

“This led to a meeting of the culture-currents of two different races. Like the Ganga and Jumna, they flowed for a while through separate courses, but nature's immutable law brought them together and joined them in a sangam. This fusion was a notable event in history. Since then, destiny, in her own hidden way, began to fashion a new India in place of the old. We brought our treasures with us, and India too was full of the riches of her own precious heritage. We gave our wealth to her, and she unlocked the doors of her own treasures to us. We gave her what she needed most, the most precious of gifts from Islam's treasury, the message of democracy and human equality.

“Full eleven centuries have passed by since then. Islam has now as great a claim on the soil of India as Hinduism. If Hinduism has been the religion of the people here for several thousands. of years, Islam also has been their religion for a thousand years. Just as a Hindu can say with pride that he is an Indian and follows Hinduism, so also we can say with equal pride that we are Indians and follow Islam. I shall enlarge this orbit still further. The Indian Christian is equally entitled to say with pride that he is an Indian and is following a religion of India, namely Christianity.


“Full eleven centuries have passed by since then. Islam has now as great a claim on the soil of India as Hinduism. If Hinduism has been the religion of the people here for several thousands. of years, Islam also has been their religion for a thousand years. Just as a Hindu can say with pride that he is an Indian and follows Hinduism, so also we can say with equal pride that we are Indians and follow Islam. I shall enlarge this orbit still further. The Indian Christian is equally entitled to say with pride that he is an Indian and is following a religion of India, namely Christianity.

“Eleven hundred years of common history have enriched India with our common achievement. Our languages, our poetry, our literature, our culture, our art, our dress, our manners and customs, the innumerable happenings of our daily life, everything bears the stamp of our joint endeavour. There is indeed no aspect of our life which has escaped this stamp. Our languages were different, but we grew to use a common language; our manners and customs were dissimilar, but they acted and reacted on each other, and thus produced a new synthesis. Our old dress may be seen only in ancient pictures of bygone days; no one wears it today.

“This joint wealth is the heritage of our common nationality, and we do not want to leave it and go back to the times when this joint life had not begun. If there are any Hindus amongst us who desire to bring back the Hindu life of a thousand years ago and more, they dream, and such dreams are vain fantasies. So also if there are any Muslims who wish to revive their past civilization and culture, which they brought a thousand years ago from Iran and Central Asia, they dream also, and the sooner they wake up the better. These are unnatural fancies which cannot take root in the soil of reality. I am one of those who believe that revival may be a necessity in a religion but in social matters it is a denial of progress.

“This thousand years of our joint life has moulded us into a common nationality. This cannot be done artificially. Nature does her fashioning through her hidden processes in the course of centuries. The cast has now been moulded and destiny has set her seal upon it. Whether we like it or not, we have now become an Indian nation, united and indivisible. No fantasy or artificial scheming to separate and divide can break this unity. We must accept the logic of fact and history, and engage ourselves in the fashioning of our future destiny.


Conclusion
“I shall not take any more of your time. My address must end now. But before I do so, permit me to remind you that our success depends upon three factors: unity, discipline, and full confidence in Mahatma Gandhi's leadership. The glorious past record of our movement was due to his great leadership, and it is only under his leadership that we can look forward to a future of successful achievement.
The time of our trial is upon us. We have already focussed the world's attention. Let us endeavour to prove ourselves worthy. “