How heartbreaking images from Aleppo could actually change international norms 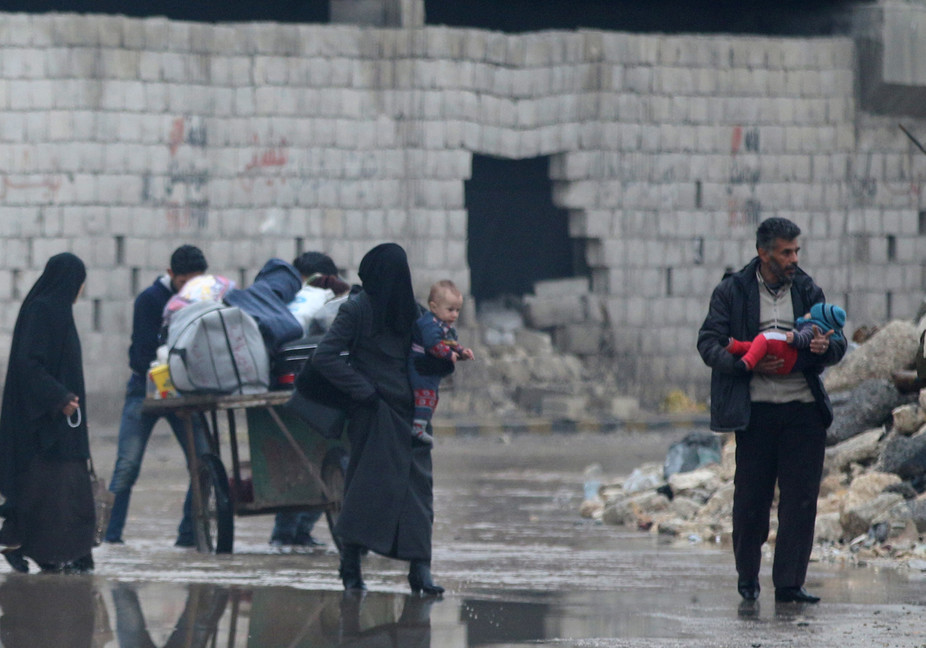 The siege of Aleppo is a mass atrocity with unprecedented levels of visibility. Confronted with the horrific images of a destroyed city, and the testimonies of wounded survivors using social media to reach out to the world, many have argued that a complete meltdown of humanity is unfolding.

Some have lamented that the post-Holocaust cry of “never again” proved meaningless and that UN tenet of the responsibility to protect is based on empty words at best.
I dare to disagree. Yes, over the past five years, the responsibility to protect doctrine has failed to shape political interests and mobilise effective action to prevent tragedy in Aleppo. But it is important to understand that the best we can do for Syria or any other war-torn country is to improve and strengthen international norms for the protection of civilians.

The problem is not that norms such as the responsibility to protect are empty but that they evolve not just through consensus, but also through contestation; not just with the excitement of success but also with the emotional responses to failures to protect.

In the case of Aleppo, the images we have seen have had an impact on the political debate and international perception of the humanitarian situation. They also might have an important role in future discourses about the responsibility to protect. 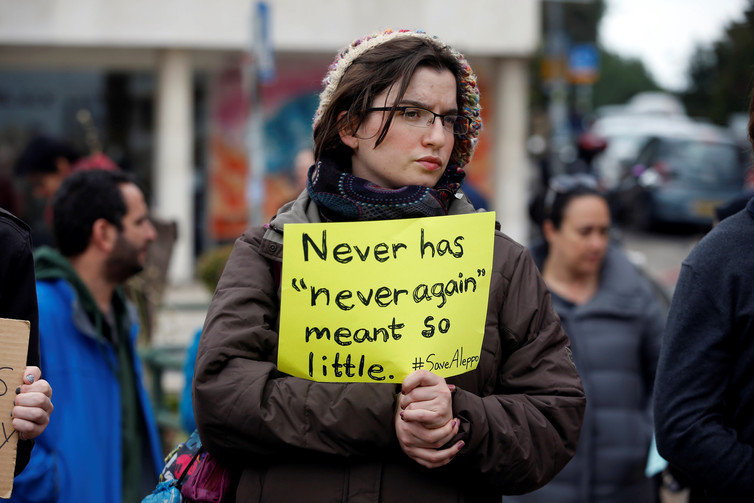 A protester in Israel echoes the thoughts of many in the international community. Baz Ratner/Reuters

The politics of images in Aleppo

Samantha Power, author of the 2002 bestseller, A Problem from Hell: America and the Age of Genocide and currently US ambassador to the UN, highlighted the videos sent by Aleppo survivors in her speech to the Security Council on December 13.

She warned that Aleppo “will join the ranks of those events in world history that define modern evil, that stain our conscience decades later”. These events were Halabja (the 1988 massacre of Kurdish people by the Iraqi regime under Saddam Hussein), Rwanda, Srebrenica, and “now Aleppo”.
She concluded her speech asking Syria, Russia and Iran if they were “truly incapable of shame”, if there was nothing they would not “lie about or justify”. 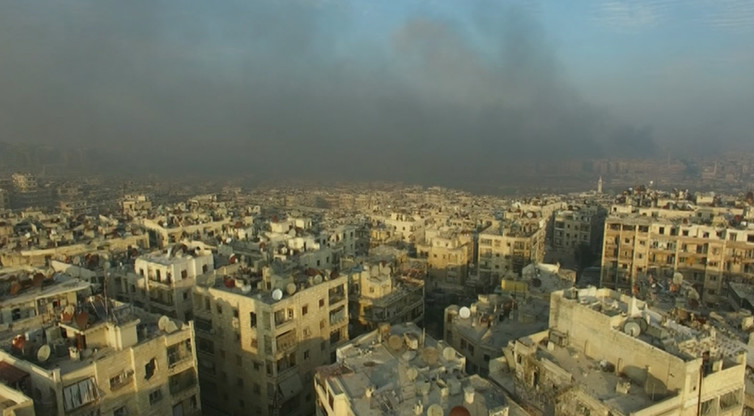 The Russian ambassador replied by first questioning the authenticity of those videos, then providing other facts, and finally refusing to take moral lessons from the United States, which has its own doubtful track record.

Politics is a competition over narratives and meaning. But images produce meaning not only on the basis of their informative character, they can also trigger empathy in a way no other testimony can.

This does not mean that images from war zones, such as Syria, are not contested. A recent video of Canadian activist Eva Bartlett casting aspersions on the veracity of images of children being rescued from the rubble in Aleppo went viral, prompting a detailed fact check of her claims from the UK’s Channel 4. In exactly this way, the ground war in Syria is translated into an online information war worldwide.

But in the longer term, the images of atrocities and the emotional responses they provoke may have more radical political consequences. 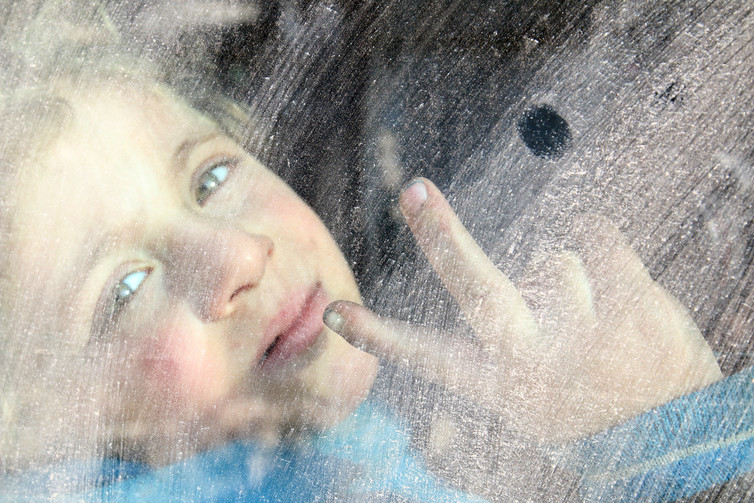 A boy flashes the victory sign while riding an evacuation bus from a rebel-held sector of eastern Aleppo. Abdalrhman Ismail/Reuters

Our failure to protect in the past has triggered the development of humanitarian norms such as responsibility to protect. This experience has been closely related to the visibility of some atrocities and the invisibility of others.Images of the Holocaust were key to establishing it as a paradigm of injustice. And it was after the first fully fledged televised war in Vietnam that American scholars resurrected ethical discussions about “just wars”.
My research shows that in the months leading to the humanitarian intervention in Kosovo, most of the leaders of NATO’s members gave speeches about the necessity of avoiding another Bosnia and formulated this imperative by explicitly linking it to the visibility of mass atrocities in both places.
On March 11 1998, Bill Clinton said:

We do not want the Balkans to have more pictures like we’ve seen in the past few days, so reminiscent of what Bosnia endured.

A few days later, graphic pictures of the Bosnia conflict were projected during a US Congress hearing to remember the massacre in Srebrenica.

Expressions such as “to watch” or “to see” were associated with other terms such as “to wait,” or “stand by”, or “stay still”, while intervention and action were typically expressed by combining “to do” and “not watch anymore”. There are echoes of this in statements about Aleppo today. 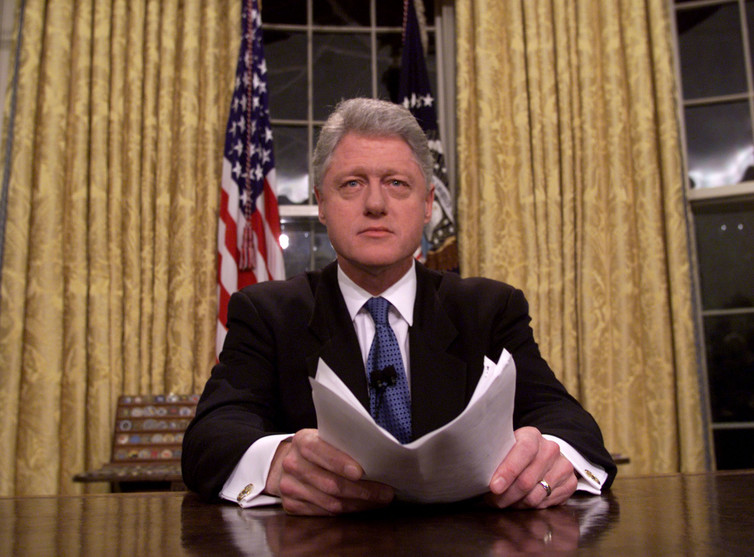 President Clinton after his national television address on the Kosovo crisis on March 24 1999. Reuters photographer

But visibility does not necessarily lead to “good” international norms or “good” politics.

In Kosovo, a less-than-ideal military intervention led by NATO without a UN mandate broke the political deadlock. But the weaknesses and ambiguities of that intervention made a critical assessment of the humanitarianism necessary and led to the development of the responsibility to protect principle.

Eleven years after its inception and five after its implementation in the Libya crisis, the idea of the responsibility to protect is clearly in trouble.
It has been increasingly contested (mainly, but not exclusively, by Russia) and seen as part of neocolonial understandings of the international order.

In a political climate characterised by the rise of a new nationalism in Europe, the US and beyond, and increasing public indifference or even hostility to the dispossessed and the vulnerable, it should not be taken for granted that hearts around the world would “break” at the sight of Aleppo.

But still, they do, seemingly including those of some politicians. This might create political momentum for further development of international norms for the protection of civilians.

This is not an easy task, and it requires a genuine international dialogue. But it is not an impossible task either. As the UN Security Council resolution on the safe evacuation of Aleppo demonstrates, common ground still exists.

Possible ways forward include focusing on protection and distinguishing more clearly between conflict prevention, humanitarian intervention and the prevention, mitigation or halting of mass atrocities. Structural prevention, which combines different strategies to address the root causes of atrocities, also needs to be rethought – by reallocating its ownership to local communities.

Last but not least, Western leaders should stop talking from a position of moral superiority like Samantha Power did. European leaders have had their own meltdown of humanity with the refugee crisis, but have never evoked the responsibility to protect in that context.

The outrage provoked by the images of Aleppo has changed the political debate. Will it change the way we think about our responsibility to protect? Potentially. The international community must use these images to change the narrative, otherwise it will only be left with discredited norms.


(The author is an Associate Professor in International Relations, University of Southern Denmark; Disclosure statement: Chiara De Franco receives funding from the Danish Research Council for a project investigating how the European Union practices prevention of civilians)

Courtesy: The Conversation
Disclaimer:
The views expressed here are the author's personal views, and do not necessarily represent the views of Sabrangindia.in