Written by Philip Weiss | Published on: December 7, 2016
John Kerry offered yet another tough-love talk to Israel at the pro-Israel Saban Forum yesterday. The United States gives Israel more than half of the aid that we give “to the entire world,” and Israel simply ignores us when we warn it about new settlements. 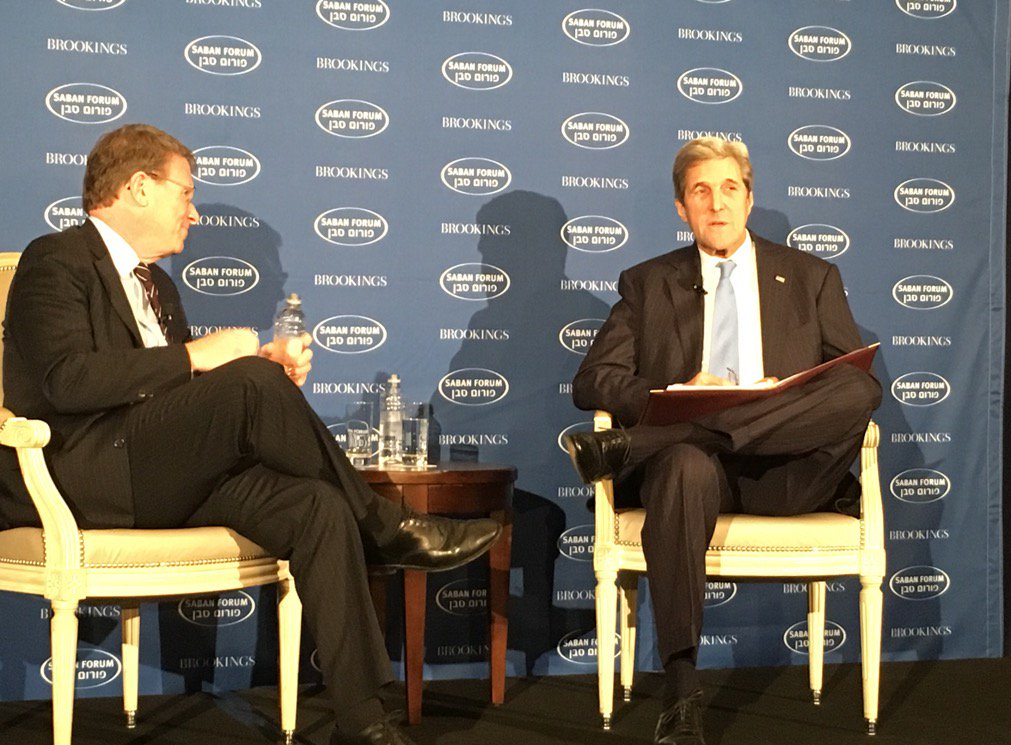 Kerry: Every president, Republican and Democrat, has been opposed to settlements – we issue a warning today when we see a new settlement announced. Nothing happens. It’s ignored, a new settlement goes up. New units, new sales. So the issue —
Journalist Jeffrey Goldberg: You’re describing a situation in which you have zero leverage.

Goldberg: But they never listen to you.
Kerry: No, they don’t, and they haven’t listened on settlements, that’s correct.

Here’s how much money we give Israel to ignore us.

I’ve watched while we, the Obama Administration, have put $23.5 billion on the line for foreign military financing. More than 50 percent of the total that we give to the entire world has gone to Israel. We have just signed an agreement for $38 billion over 10 years, $3.8 billion a year, up from 3.1.

Goldberg, the new editor-in-chief of the Atlantic, played the innocent. He knows damn well why the U.S. government has no leverage over Israel; because of Israel-loving journalists like himself and Israel-loving donors like Haim Saban. He ventured that the two-state solution (which he did as much as anyone to kill) is dead because there are now so many settlers in the West Bank there can never be a Palestinian state:

MR GOLDBERG: Have we not passed the tipping point already?
SECRETARY KERRY: No, no.

(This is further evidence for my prediction that Goldberg in his new incarnation as liberal American editor in the footsteps of the abolitionists will become an anti-Zionist.)
Kerry also protested that he has spoken to Benjamin Netanyahu 375 times as Secretary of State, to the point that his wife says he talks to Netanyahu more than to her. He hinted that the Obama administration may get the last word with Netanyahu at the UN Security Council:

Kerry: Because of this building frustration, you need to know they are any number of countries talking about bringing resolutions to the United Nations.
Goldberg: Will you try to stop the French if they do it?

Kerry: If it’s a biased and unfair and a resolution calculated to delegitimize Israel, we’ll oppose it. Obviously, we will. We always have. But it’s getting more complicated now because there is a building sense of what I’ve been saying to you today, which some people can shake their heads, say, well, it’s unfair.

this small little city state, which is what effectively the West Bank would be, demilitarized as it would be

That’s reminiscent of the famous line on the vice presidency: it’s not worth a bucket of warm piss.

Kerry also warned that Israel is “heading to a place of danger,” because of its own decisions.

But I do believe that Israel, because of decisions that are being made on a daily basis quietly and without a lot of people seeing them or fully processing the consequences, is heading to a place of danger.

And just as he had researched the 375-conversations-with-Netanyahu number for the occasion, Kerry itemized the number of settlers, and reminded the audience that Israel built the wall on stolen land:

But back then in 1993 [when Oslo principles were signed], there were 110,000 settlers in the West Bank. Today there are 385,500 or so. There is an increase – there is about 90,000 settlers living outside of the barrier. And the barrier, I want to remind everybody here, was established by Israel.

Now, these outposts begin as one building, two buildings, then they become a scattering of 10 or 15, then they become a, quote, “settlement.” And what’s really concerning about what is about to happen is that many of these outposts, most of them, are built on what is considered to be Palestinian private land. Now, since Obama became president, the population outside of the barrier in the West Bank has increased by 20,00 people.

Message, you’re on your own. You made your bed. But we might flip you the bird back before we go.