Feminists and feminisms come in many forms: Suspend judgment!

The responses of feminist activists to the Suspend Judgement! campaign reveal the hidden hierarchies of power and exclusion we must confront. Part 2. Part 1. 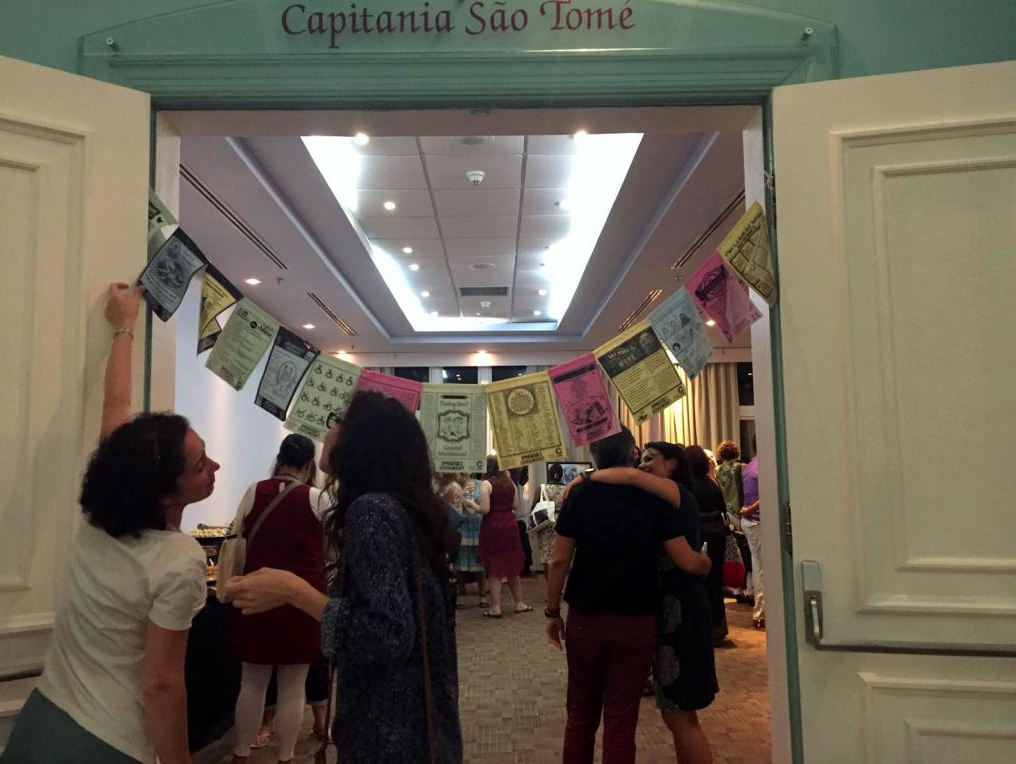 In the days before the internet, smartphones, texting, Facebook, twitter, Instagram, and what have you, the distribution of parchas (Hindi for political leaflets, pronounced pur-chah) was once a popular organizing tradition of street activists and protesters, especially in South Asian countries. Even today, you can see variations of parchas pasted across city walls, although they are more likely to be advertisements rather than political messages.

Inspired by these movement traditions of the global south, CREA decided to use this medium as an integral part of the “Suspend Judgment” campaign launched in  September at the AWID International Forum in Bahia, Brazil. Suspend Judgment features fourteen feminist parchas exploring difficult questions at the intersection of sexuality, gender and rights. As described in part 1 of this two-part article, we see Suspend Judgment as a campaign that both challenges and goes to the heart of the future of feminist organizing and practice.  It is an innovative movement-building effort focused on feminists themselves as much as other social actors, provoking all of us to think and act intersectionally, and reflect critically on deeply rooted assumptions about who is deserving of rights, what forms of difference construct stigma and marginalization, and what an inclusive agenda for social transformation might actually look like - if we suspend judgment!

Comments made by AWID participants in reaction to Suspend Judgment! leaflets posted at the AWID Forum. Designed by Sherna Dastur/ CREA.

The decision to use parchas was strategic and built on what had once made them a popular option for social movements at mass gatherings like the AWID Forum: they were cheap, imperfectly printed, and easy to produce in massive quantities. This economical aspect made parchas easy to print, distribute, take home, or read and discard. Small collectives, opinionated individuals, well organized political parties - everyone could make parchas. Which is why they were ubiquitous in marches, rallies, campuses – sometimes so much so that people recall using parchas as tissues.

Our strategy was simple: Starting from the CREA booth where the parchas were available for taking and fanning out through the Forum grounds. CREA invited feminists to read, comment, and like street activists themselves, paste the parchas on walls and columns. The fourteen Suspend Judgment parchas addressed both dominant perceptions and alternative perspectives on a wide spectrum of issues, from sex workers rights, pleasure and consent, intersex rights, abortion stigma, SRHR, anti-trafficking, bodily integrity, disability and sexuality, and more.

The responses to the parchas were equally diverse:  the conversations and reactions from activists [see box] represented a wide spectrum of feminist positions from movements around the world, some energizing and some revealing. In one exceptional instance, a young intersex activist walked into the booth and expressed surprise and then thanks for our inclusion of intersex issues.  For those of us in the booth, being thanked for this was a shocking confrontation with the architecture of power within our own movements. We realized not only that certain conversations and constituencies are minimized or invisible even under our feminist and LGBTQI umbrellas, but that we are facing an even more colossal task: how do we authentically address this kind of othering without flattening our agendas in order to build collective voice and power? It requires self-education, re-education, and un-learning past attitudes and ideas.  Most of all, suspending judgment is the first step towards understanding and valuing struggles outside of our own.

Suspend Judgment! parcha (leaflet) on display at the AWID Forum.Designed by Sherna Dastur. CREA
AWID Forum participants Comments posted on Suspend Judgment leaflets by participants at the AWID Forum:
“I’ve sold my mind (my ideas, my creativity) and my hands (my physical abilities) in order to survive. That’s called WORK. I don’t see what’s wrong about selling my body – it is my CHOICE. Do you?"
“Can money buy consent?”
“South-South Collaborations and collective organizing will realize equality & justice for women all over the world. Amandla!!”
“Regardless of sexual orientation/preferences, each human being has the right to be free, safe and love!”
“My friend had an abortion & was worried about – [what] her family thought – going to jail – her future hardships [were] more stressful than the abortion itself.”
“Sin limites<3” (“No limits” - on the Disability and sexuality parcha)
“I JUST WANTED the right to choose my sexual life and life plans - always!!”
“Derecho a decider ya!” (The right to choose now!)
“I had two abortions when I was younger because: 1. I was careless; 2. My contraception failed and I thought I shouldn’t pay FOR LIFE for those small, stupid mistakes. A huge mistake (an unwanted child) is no way to solve a small one. Later on I had THREE wonderful children, because I wanted to.”
“We need to be open to thinking outside of the box and allow ourselves time and space to think beyond [the] current to new realities.”
Discomfort was a common reaction to several of our parchas, but we soon realized that discomfort is a powerful force for change.  It can be generative, reveal gaps in our organizing, and push boundaries - it can make us better feminists. For example, barely anyone commented on our sadomasochism parcha, though it dealt with the fundamentals of consent, trust and diversity.  There were also many NGO representatives who stopped by the booth, looked through the leaflets and congratulated us on a brilliant “marketing strategy” without once referring to the content or messaging.  But this silence could equally signal disturbance, and therefore hopefully a deeper impact of the messages.  Some of these specific reactions around aesthetics rendered the parchas back to their contemporary form on the streets of Delhi – as though they were an attempt at self-advertisement and branding. These encounters were also emblematic of the penetration of a highly corporatized development paradigm that feminist organizations are compelled to confront in both their donors and supposed allies.

Language is obviously a key issue with the use of a printed medium like leaflets, and this was a major barrier in a space like the AWID Forum, with participants from every major and minor language group.  CREA staff at the booth struggled to translate the parchas to polyphonic visitors, especially Lusophones.  Our team did their best to communicate – in English and broken Spanish – what the parchas said, and what the Suspend Judgment campaign was about.  But these instances of linguistic awkwardness also helped highlight another power structure when trying to connect across geographies – the hegemony of certain languages - which begets the larger question of creating more inclusive strategies of feminist knowledge production.

Then there were phenomenal discussions around the idea of Suspend Judgment itself.  One person posted the question, “Can money buy consent?” adjacent to another participant’s comment supportive of sex work as work.  All this against the backdrop of the birthdays of FRIDA (the Young Feminist Fund) and the Red Umbrella Fund (a global fund by and of sex workers to advance sex workers’ rights) - celebrated jointly with a sex worker and ally-led fashion show that transgressed the norms of a generally polite Feminist Forum!

This, perhaps, is the crucial point: there are many feminisms and feminists come in many forms.  The old binaries of power - North versus South, rich versus poor, indigenous knowledge versus academic epistemology– are still present, but many new axes have arisen over the past decade, creating new gatekeepers of who is or is not “truly” feminist, and what is and is not “real” feminism. The diverse commentary that Suspend Judgment generated highlights how inclusion is itself a moving goal post that needs to be constantly surfaced and relocated through discussion, debate, inquiry, and listening to unfamiliar voices – but also through discomfort, dancing, friendship, and grace.

This is not a historic moment when we can politely agree to disagree. As activists from the Pacific regularly reminded us throughout the AWID Forum, we have far greater forces arraigned against us: the corporate monopolies that dictate climate change policy, the rising seas themselves; and the lack of recognition across the board of how intimately our feminist movements are actually connected to the struggles for economic justice, environmental justice, and social justice.  The struggle to give new form to our many different ways of practicing solidarity and alliances, the struggle for more intersectional thought and action, all need to be a fundamental part of practicing a more powerful new feminism. This means having the courage to smash our comfortable silos and smash our judgments.

The authors are indebted to CREA colleagues at the AWID Forum and participants for their contributions to this article. We would like to specially thank Rupsa Mallik, Sherna Dastur, Shuchi Tripati, Chaitali Bhatia, Sushma Luthra.

Nafisa Ferdous is a programme coordinator at CREA. She has worked as a qualitative researcher and gender specialist in India, Kenya, Indonesia and several other countries in the field of gender, environment and rights

Geetanjali Misra is the co-founder and Executive Director of CREA. She has worked at the activist, grant-making, and policy levels on issues of sexuality, gender, and rights. Before CREA, she worked for the Ford Foundation, was co-founder of SAKHI, an anti-VAW organization for women of South Asian origin, President of the board for AWID, and is currently on the board of Mama Cash.

Srilatha Batliwala is Director Knowledge Building and Feminist Leadership at CREA (Creating Resources for Empowerment in Action).  She is a feminist activist, scholar, and writer with four decades of experience that ranges from grassroots activism and movement building with some of the poorest women in India, to research and building theory from practice in premier international academic institutions and feminist organizations.