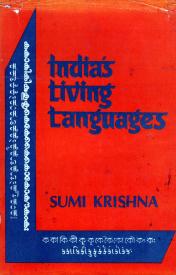 ISBN Number:
81-7023-143-4
Published Date:
Wednesday 1st May 1991 Asia/Kolkata
Author:
Sumi Krishna
Summary:
India with its extraordinary diversity is home to a very large number of languages, some very ancient, widespread and even international, others limited in area and numbers, but all part of the mosaic of Indian nationhood. India must also be among the few multilingual societies in the world engaged in building a new nation without actively forging a common means of communication. Hindi today is not prescribed as “the national language” but is the “official language” of the Union, with English now tagged on as an associate language for an indefinite period. The 15 languages listed in the Eighth Schedule, and the other languages not so listed, are all equally national languages.

It was to look at India’s languages in the round and not just at official language policy that this book has been written. The subject is of obvious social, cultural and political importance, but has strangely remained unexplored all these years by scholars, writers, the media and Government alike. This book explores how India has managed or must manage its linguistic pluralism.