#Caste is not a rumour: The online diary of Rohith Vemula 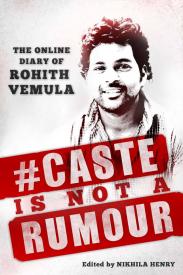 Published Date:
Tuesday 9th August 2016 Asia/Kolkata
Summary:
#Caste is not a rumour: The online diary of Rohith Vemula is a collection of Mr. Vemula's online writing. The book, which is over 40,000 words, includes most of his Facebook posts. The books carries his views on a gamut of issues including politics and academics. His online account is a scathing critique of both the Right and the Left wing political formations in India. His account points a finger at the ruling Bharatiya Janata Party and its leader Narendra Modi.

Mr. Vemula's critique of the Communist parties in India and its savarna leaders makes his work the vision of a young Ambedkarite. The book is Rohith Vemula's pointer on how caste operates in modern India. More, in his writing Mr. Vemula reveals how caste operates in University of Hyderabad and how it led to his institutional murder.The book has been edited by Nikhila Henry and is published by Juggernaut Books.
It will be available on Juggernaut Books' online app starting midnight August 9.