Beyond Doubt: A Dossier on Gandhi's Assassination 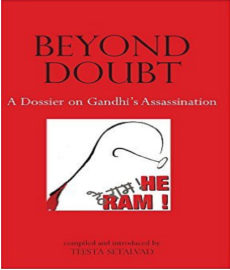 ISBN Number:
ISBN-10: 9382381503
Published Date:
Monday 9th February 2015 Asia/Kolkata
Author:
Teesta Setalvad
Summary:
The assassination of Mahatma Gandhi on 30 January 1948 was a declaration of war and a statement of intent. For the forces who conspired in the killing, the act was a declaration of war against the secular, democratic Indian state and all those who stood to affirm these principles, as well as an announcement of a lasting commitment to India as a Hindu Rashtra . It was also an act to signal the elimination of all that India s national movement against imperialism stood for. Beyond Doubt is a dossier of historical and critical documents that aims to contextualize the politics, motivations and circumstances behind the assassination of Mahatma Gandhi. Attempts to legitimize the act of killing and to celebrate the killers have re-doubled since May 2014, following the coming to power of the new regime in New Delhi. The time is right, therefore, to set the record straight. The visceral hatred directed against Gandhi and the denigration of everything he stood for need to be recounted if we are to understand the political nature of that dastardly act. This book attempts to weave together archival documents from Government of India records relating to developments after the assassination, with translation of works in Marathi, Gujarati and Hindi de-constructing the ideology responsible for the political killing. While several of the documents have appeared before in issues of Communalism Combat, this compilation presents new material on the subject. The first English translation of Jagan Phadnis s book, Mahatmyache Akher, forms part of the dossier, as do Y.D. Phadke s analysis of attempts to legitimize Gandhi s killing and Chunibhai Vaidya s analysis of Pradeep Dalvi s play on Godse. It also covers the recent controversy over the destruction of files relating to Gandhi s assassination by Government of India.