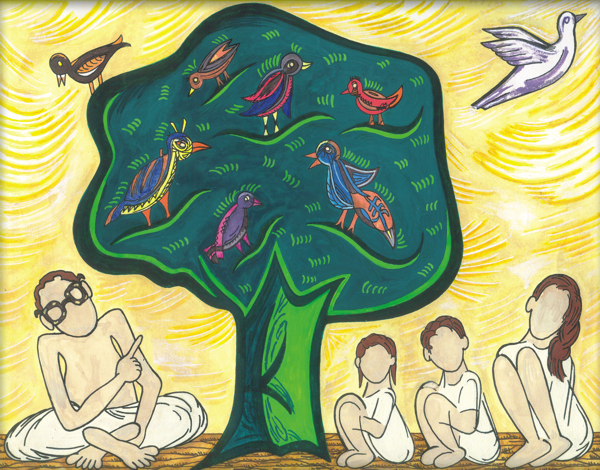 Education is fertile ground for transformation and, equally, a potent tool for breeding bigots. A study of science, literature, the arts, theology and history the world over reveals in equal measure both human tendencies. For us South Asians, born on a terrain that is uniquely diverse – where pluralism is at once linguistic,  cultural and religious – the manipulation of history and social studies teaching to shape mind-sets that have little respect for democracy and pluralism is relatively recent. After independence from British rule, which brought with it a partition that was bitter and bloody, the different countries that make up this region made their individual and independent journeys into modernity where the vision of education policy became crucial. India made a head start, clearly outlining the transformative aspect of education and syllabi that must be rational and inclusive. Pakistan, grappling with its own identity, reflected this confusion and textbooks at the school and university level revealed many contradictions: the pre-Mughal Harappa and Mohenjodaro wonders that we have been bred on were absent in school textbooks although these civilisations could be studied at university in Pakistan. Sri Lanka, which failed to give the Tamil language official status within its Constitution in the early 1950s, sowed the seeds of alienation at its birth.

India, which started out confident in its belief in pluralism and democracy, saw the corrosive growth of communal politics visibly affecting the sphere of education and culture from the mid-1980s onwards. Education falls under the concurrent list in our Constitution and hence we have central boards of education as well as the more numerously visible state education boards. History and social studies textbooks produced by the official boards of education, especially in states like Gujarat, Maharashtra, Madhya Pradesh, Uttar Pradesh and Rajasthan, saw clear shifts, with blatant manipulations in the historical narrative; at best, exclusionary, at worst, hate-driven. Even the books of some of the prestigious central boards of education were not impervious to this trend.

Our foray into alternate journalism with the birth of Communalism Combat was accompanied with our work in the area of education through Khoj, the education for a plural India programme. Fifteen years of work in this field, analysing educational policy and history and social studies textbooks, and constructing alternate syllabi, has been periodically reflected in the pages of this magazine. Khoj also organised two pioneering workshops, the first an intensive interaction between leading historians and school history teachers in 1997, followed, two years later, by the South Asia Historians’ Workshop. Leslie Gunawardana, anthropologist from Sri Lanka, and Mubarak Ali from Pakistan conversed for three intense days with Romila Thapar and KN Panikkar among others.

In 1999 the BJP-led NDA government made its first attempts at altering the vision behind India’s education policy through the introduction of value education with a majoritarian ‘Hindu’ tinge (chief ministers and allies of the alliance objected vociferously to this move by former minister for human resource development, Murli Manohar Joshi). The attempt, fortunately unsuccessful, was made while bypassing Parliament and the Central Advisory Board of Education (CABE). Khoj, Communalism Combat and SAHMAT were among the voices at the forefront of the protest. Khoj’s research on Gujarat’s social studies textbooks also became the subject of a special investigation by a parliamentary committee headed by former union home minister, SB Chavan, which directed the state to remove the disparaging remarks against the minorities. To date Gujarat has not complied.

Our work in analysing the textbooks of over 10 states revealed dangerous trends within state-run schools and worse, those privately run by organisations affiliated to either religious denominations or political ideologies. At the time of independence the most significant player in private education was the Christian school. Today the most powerful and heavily funded (through foreign monies) are the schools owing affiliation to bodies that are part of the wider family run by the Rashtriya Swayamsevak Sangh (RSS) and Vishwa Hindu Parishad. Outside of state control, these schools put aside the prescribed official textbooks and employ materials that clearly vitiate the constitutional mandate.

The UPA government reconstituted the CABE in 2004. At its first meeting thereafter the CABE set up a committee to investigate and analyse such texts all over India. ‘The Constitutional Mandate and Education’, a report prepared by Khoj, was submitted to the CABE after being endorsed by about two dozen groups and movements. The committee, using this report and others submitted from many parts of the country, arrived at a detailed report with recommendations. We reproduce a significant portion of the CABE report in this issue of Communalism Combat. One of the CABE committee’s recommendations has been to set up a permanent body to monitor textbooks, including those used by privately run schools and institutions. Such a permanent mechanism, once in place, will allow academics and activists a viable means to complain about dangerous anomalies that creep into teaching and learning materials.

We hope that this report is useful to our readers.