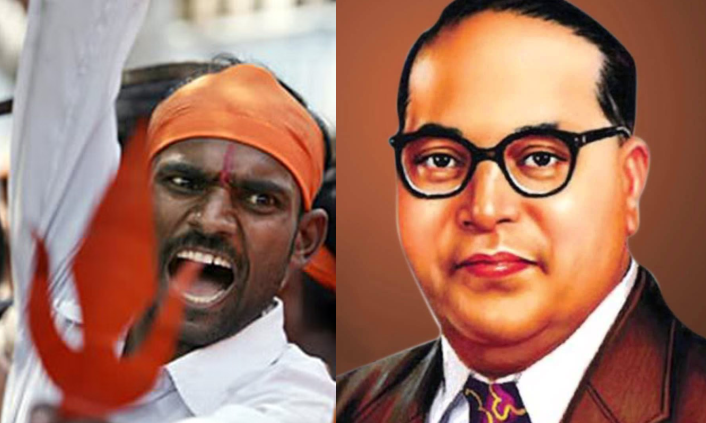 On the Eve of Babasaheb's 125th Birth Anniversary, April 14, 2016, the Haryana Government Heaps Insults on Dalit History by renaming Gurgaon as Gurugram

The Rashtriya Swayamsevak Sangh (RSS) is terribly busy re-writing history these days. It will be more appropriate to call it a guillotining of history, as facts and historical realities are being sacrificed at the altar of the political ambitions of the Hindutvawaadis.

So far this ‘creativity’ was restricted to the works and words of Mahatma Gandhi, Bhagat Singh and Sardar Patel. Of late Babasaheb Ambedkar appears to have become the latest victim of the malafide manufacturing of history by the flag-bearers of Hindutva. Dr Ambedkar is being –assiduously and insidiously -- presented as a leader in the league of (sic)  K.B. Hedgewar and M.S. Golwalkar: Defending the cause of the Hindu Rashtra.

Way back in 2003 it was Vinay Katiyar, the former head of Bajrang Dal and a diehard product of RSS cadres, who first declared that B.R. Ambedkar was a great supporter of both Hindutva and the Hindu Rashtra, just like KB Hedgewar, the founder of the RSS.

In the more recent past, this attempt at hijacking of Dr. Ambedkar has accelerated with the coming to power of the RSS-BJP combine in India in 2014. True to its tradition, RSS-sponsored ‘think tanks and 'thinkers' have started manufacturing their version of a manipulated history. They have –predictably but no less shamelessly –gone to the extent of putting words in Ambedkar’s mouth; attributing to him –Babasaheb—words that he neither spoke, wrote or believed.

On the eve of 124th birth anniversary of Dr. Ambedkar (2015), the RSS published special issues of both its English and Hindi organs. One of the articles in these, written by a joint general secretary of the RSS, Krishna Gopal said, “Untouchability was not part of Hinduism but originated during the 'Muslim' rule.” According to Gopal: "He (Ambedkar) says Untouchability encrypted Hindu society 12 to 13 hundred years ago."

Now this is as bizarre as it is untrue. Dr. Ambedkar renounced Hinduism in 1956 because of its repressive elements and converted to Buddhism.

In his remarkably written, polemical piece, What Congress and Gandhi Have Done to the Untouchables, he wrote, “To put the matter in general terms, Hinduism and social union are incompatible. By its very genius Hinduism believes in social separation which is another name for social disunity and even creates social separation. If Hindus wish to be one, they will have to discard Hinduism. They cannot be one without violating Hinduism. Hinduism is the greatest obstacle to Hindu Unity. Hinduism cannot create that longing to belong which is the basis of all social unity. On the contrary Hinduism creates an eagerness to separate”.

These crass efforts to portray Dr. Ambedkar and his legacy,to parade him so to say, as a supporter of Hindutva do him great injustice. Throughout his life he was a great opponent to the politics of Hindutva and the Muslim League, both. His book, Pakistan or The Partition of India (1940) is a living testimony of his views. They are well articulated and speak out against the nefarious designs of communal elements in India. His ideas and warnings on Hindutva contained in this book can, and must, work as great bulwark in checking the resurgence of forces of Hindu communalism.

Contrary to what RSS 'thinkers' are telling us, Dr. Ambedkar felt thus, “If Hindu Raj does become a fact, it will, no doubt, be the greatest calamity for this country No matter what the Hindus say. Hinduism is a menace to liberty, equality and fraternity. On that account it is incompatible with democracy. Hindu Raj must be prevented at any cost.” According to him the pet slogan of Hindutvawaadis —Hindustan for Hindus—is and was, not merely an arrogantly held belief but amounted to, arrant nonsense.

Ambedkar was of the firm opinion that Hindutva was nothing but a ploy of high caste Hindus to maintain their hegemony over the resources of society. While comparing them with Muslim communalists he said: “The Hindus are the more difficult of the two parties to the question. In this connection it is enough to consider the reaction of the high caste Hindus only. For, it is they who guide the Hindu masses and form Hindu opinion. Unfortunately, the high caste Hindus are bad as leaders. They have a trait of character which often leads the Hindus to disaster. This trait is formed by their acquisitive instinct and aversion to share with others the good things of life. They have a monopoly of education and wealth, and with wealth and education they have captured the State. To keep this monopoly to themselves has been the ambition and goal of their life. Charged with this selfish idea of class domination, they take every move to exclude the lower classes of Hindus from wealth, education and power...This attitude of keeping education, wealth and power as a close preserve for themselves and refusing to share it, which the high caste Hindus have developed in their relation with the lower classes of Hindus, is sought to be extended by them to the Muslims. They want to exclude the Muslims from place and power, as they have done to the lower class Hindus. This trait of the high caste Hindus is the key to the understanding of their politics.”

These crass efforts (by the RSS-BJP) to portray Dr. Ambedkar and his legacy,to parade him so to say, as a supporter of Hindutva do him great injustice. Throughout his life he was a great opponent to the politics of Hindutva and the Muslim League, both.


Ambedkar as a leader and fighter for a Secular India did not differentiate between the flag-bearers of Hindutva and the Muslim League. He treated them as two faces of the same coin bent upon destroying India. He wrote: “Strange as it may appear, Mr. Savarkar and Mr. Jinnah instead of being opposed to each other on the one nation versus two nations issue are in complete agreement about it. Both agree, not only agree but insist that there are two nations in India—one the Muslim nation and the other Hindu nation.”

Dr. Ambedkar was fully conscious of the real designs the politics of Hindutva on the minorities. He believed there would not have been any problem if Hindus and Muslims were allowed to live as partners with mutual respect and accord. But according to him, “this is not to be, because Mr. Savarkar will not allow the Muslim nation to be co-equal in authority with the Hindu nation. He wants the Hindu nation to be dominant nation and the Muslim nation to be the servient one.”

Ambedkar as a true secularist stood for "forming mixed political parties based on an agreed programme of social and economic regeneration, and thereby avoid the danger of both Hindu Raj or Muslim Raj becoming a fact. Nor should the formation of a mixed party of Hindus and Muslims be difficult in India. There are many lower orders in the Hindu society, whose economic, political and social needs are the same as those of the majority of the Muslims and they would be far more ready to make a common cause with the Muslims for achieving common end than they would with the high caste of Hindus who have denied and deprived them of ordinary human right for centuries.”

We must not forget that Dr. Ambedkar was forced to resign as India’s first law minister in 1951 due to an aggressive campaign against him by these very Hindutva organisations that today brazenly try to appropriate him and his legacy. Dr Ambedkar was made the target of a bitter campaign by the proponents of Hindutva who were opposed to his draft of Hindu Code Bill which aimed at providing share to Hindu women in property and gender equality.

Why is it, that despite this inherent contradiction -- embodied in the anti-Hindutva ideas and analyses by Dr. Ambedkar himself -- and Hindutva's antipathy to the egalitarian agenda of Babasaheb, is the RSS embroiled in this Goebelsian propaganda  about his orientation and legacy?

One of the reasons is that the RSS –that seeks to be the moral arbiter of the Modi Regime’s brand of Hindutva -- has played absolutely no role in the freedom struggle of the country and is desperate to claim some part of that heroic heritage.

But the RSS needs Dr. Ambedkar for another reason too. Despite the doublespeak by this regime on globalisation, the Indian Government led by its favourite swayamsevaks has also been functioning as a stooge for the forces of crony capitalism. India’s Dalits have been the worst victims of this process –transfer of public resources to the private sector -- of both liberalisation and globalisation as they are, sectorally, the worst sufferers – among those who have lost livelihood in the public sector. The present breed of politicians governed by the ideology of Hindutva ---by creating a public facade of love for Dr. Ambedkar-- wants to, in actuality, through this empty symbolism, also hide its real anti-people face.

How much do the leaders who espouse Hindutva actually respect Baba Saheb and Dalit sentiments? The answer can be had from their most recent action on the eve of 125th birth anniversary of Dr. Ambedkar.

The RSS/BJP ruled Haryana government has decided to change the name of its major city Gurgaon to Gurugram (after Dronacharya) There could not be a worse humiliation of Dr. Bhim Rao Ambedkar, a Dalit icon on his 125th birth anniversary.

The RSS/BJP ruled Haryana government has decided to change the name of its major city Gurgaon to Gurugram. This change has been justified on the ground that this area was the abode of Guru Dronacharya during the times of the Mahabharata; hence the change is to honour him.

There could not be a worse humiliation of Dr. Bhim Rao Ambedkar, a Dalit icon on his 125th birth anniversary. Guru Dronacharya was the Guru who deceitfully deprived a fine archer, Ekalavya of his thumb (by demanding that his thumb be sacrificed as 'guru dakshina') so that he could not compete –and win—an archery contest with the Guru's high Caste Kaurav and Pandava students!

This renaming of Gurgaon to Gurugram does not merely reveal the brazen insensitivity of RSS/BJP rulers to the History of the Oppressed, Dalit Bahujan History on Dr Ambedkar's 125th Birth Anniversary. This action, like many others, also exposes the contradictions and hypocrisies inherent within the politics of Hindutva.