In Conversation with Teesta Setalvad

This interview with Kanhaiya Kumar, President of the Jawaharlal Nehru University Students Union (JNUSU) was conducted on the JNU Campus on March 8, 2016. It is a collaborative effort between Communalism Combat, Newsclick and Hillele TV


If the last bus on Delhi’s streets at 11 p.m. had fifty per cent of women, and we as a society ensured this, would there be molestation and violence against women? Kanhaiya Kumar

We are no Enemies of the Nation; we are against an authoritarian Modi Govt: Kanhaiya Kumar

We need freedom from hunger, from oppression, from violence, from discrimination: Kanhaiya Kumar

The RSS is anti-democratic, anti working class, against intellectual inquiry, patriarchal and against the minorities: Kanhaiya Kumar

A mass movement of students and youth to save the Constitution from the RSS-led Modi government will be my priority, not under any party or not within electoral politics: Kanhaiya Kumar

Research and academics are my passion and will be my chosen profession: Kanhaiya Kumar

The time is ripe for a nationwide movement of student and youth, to save the Constitution, to fight the Oppression being experienced by vast sections of our people, to form alliances across thought barriers: Kanhaiya Kumar

The activists from the Akhil Bharatiya Vidyarthi Parishad  (ABVP) from JNU who resigned after the behaviour of the authorities towards us have realized the double standards of the RSS when they selectively appropriate Dr Babasaheb Ambedkar, when they speak of worshipping Durga Maa and then protest on Valentine ’s Day: Kanhaiya Kumar

The RSS does not believe in the fundamentals of the Indian Constitution, in equality and discrimination; it believes that the five fingers of the hand are not equal and that each have a use: Kanhiaya Kumar

A nationwide movement for democratisation of access to education can and will be the means to then link other issues of discrimination and lack of access; we need to demand a common and decent education for all; if we vote in a government, that government must give equal quality education for all : Kanhaiya Kumar

The privatisation and commercialization of education has made ideas and academics available for a price: it is like the re-charge facilities in a mobile; those who can afford Rs 200 recharge and those who can afford a mere Rs 10; Education is a means of social transformation and needs to transcend this: Kanhaiya Kumar

Saving education from the onslaught of commercialization must be our priority: Kanhaiya Kumar

Begusarai (Bihar) was and is my roots, JNU and now the whole world is my vaster universe. JNU is where my vision has blossomed and today it encompasses what is happening at Hyderabad and Allahabad and in all universities: Kanhaiya Kumar

There should be full and complete representation of women from the Panchayat right up to Parliament: Kanhaiya Kumar 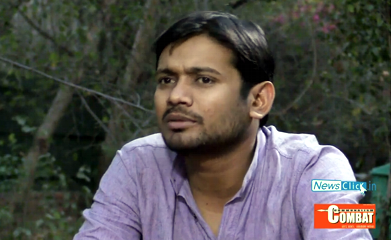