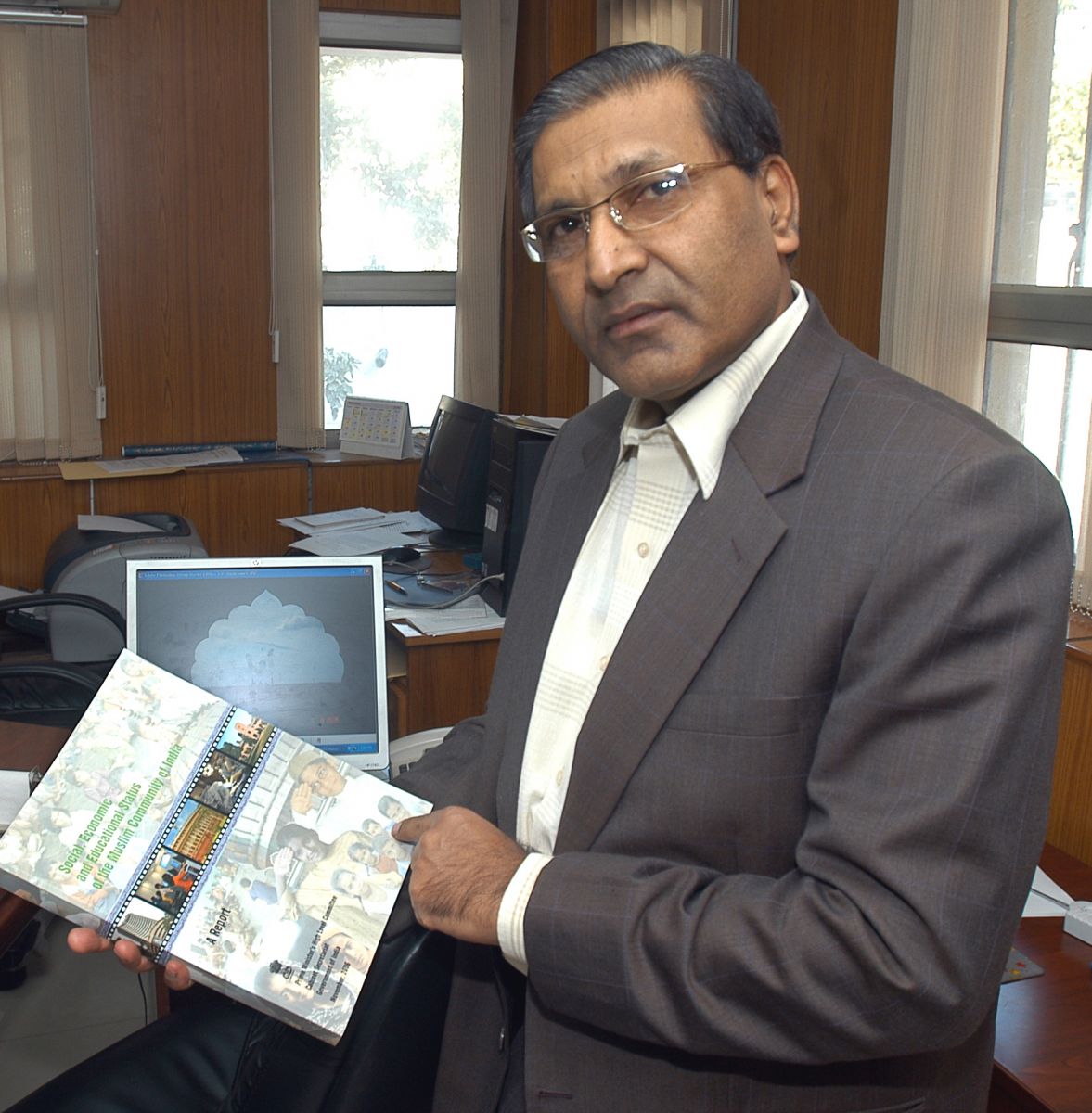 Abusaleh Shariff, who is chief economist at the New Delhi-based think tank National Council of Applied Economic Research, served as member-secretary of the Sachar Committee, the prime minister’s high-level committee appointed to prepare a report on the ‘Social, Economic and Educational Status of the Muslim Community of India’. In an exclusive interview with Governance Now five years after the committee submitted its report in November 2006, Shariff is forthright in his criticism of the Congress-led United Progressive Alliance (UPA) for ignoring the plight of the Muslim community and doing little to implement the committee’s recommendations.

Q: Nearly five years after the Sachar Committee made its recommendations, what is the status of Muslims in India now?

A: The Sachar Committee was a diagnostic tool. What we found was that the rate of change [progress] among Muslims is the lowest. It is positive for all communities. When other communities are progressing like a rabbit, Muslims are going forward at the speed of a tortoise. On one factor, that is, girls’ literacy among Muslims, we found there was in fact a reversal.

The government has not taken the underlined message of the Sachar Committee: to make Muslims part of the mainstream.

Q: The minority affairs ministry was formed in 2006 to look after the conditions of minorities. Is it serving the purpose?

We don’t want Muslims to go to the minority ministry for every single issue. Their rights and issues should be addressed by the main departments and institutions, which are accessible to every citizen of the country. [But] the HRD ministry has not written a single word on what policies have been initiated to improve the school enrolment of the Muslims. The lending to the minorities is mandated to be proportional to their share in the population of the region, state or district. At the all-India level the overall proportion is set to be 15 per cent. We need loans from banks for Muslims. When the minority groups complain, the government says they should go to the National Minorities Development and Finance Corporation under the ministry of minority affairs. Its fund is limited; the major funds are with the banks. The government has created such organisations to make a few Muslim groups happy. The main purpose of mainstreaming the minority community gets lost. That is the frustration even five years after the Sachar Committee. The government is doing the exactly opposite thing.

The UPA government is doing identity politics, which the BJP also criticises. The Muslim community will never get any benefit from such identity politics. I don’t have any problem with the Wakf Board and madrassas but I want universities to show that 15 per cent of their students are Muslims. Dalits are getting better every year [but] not the Muslims. The rate of change of Dalits is five per cent but for Muslims it is just 0.6 per cent.

Q: So you doubt the government’s intentions?

A: The Congress-led government has very good policies but when it comes to addressing the issue of religious differences, it is shying away from fulfilling its duty – the latest being the non-implementation of the Sachar Committee recommendations. What we are asking is to create a religious-minority space in a democracy. It is a matter of educating the community, which the government is not doing. The progress of minorities is important for the development of the country. On the job front, the central government fares the worst in giving jobs to Muslims, as found by the Sachar Committee. Muslims constitute only three per cent [of those employed] in the Mahatma Gandhi National Rural Employment Guarantee Scheme. There are hardly any anganwadi (crčche) workers in the Muslim-dominated centres.

Public space should be made accessible to every citizen of the country, no matter what community they belong to. In a democracy, social identity should not have any role in providing basic access, identity, rights. This is my critique of the government. It is a serious governance issue.

Q: Have you put your views before the Planning Commission which has finalised the approach paper for the 12th five-year plan?

A: There is a lacuna in the approach the Planning Commission has taken. The philosophy of the Sachar Committee is that whatever welfare activities you take up, you have to bring equity to services. Secondly, allocate resources to different departments and different programmes. Now you build up a mechanism to evaluate such programmes in such a way that equity is reflected in the outcome indicators. If you want this then you have to establish an equal opportunity commission which will oversee government policies on bringing equity. Also, there has to be a compilation of a diversity index which will measure how diverse your programme will be. That is what the Planning Commission has to incorporate.

For example, Muslims do not get the share [i.e. their proportionate share in loans] in the public sector banks. The government says that 14 per cent of it goes to the minorities. It is not going to Muslims alone but to all minorities.

There is no elaboration of inclusive development. It was there in the 11th five-year plan without any framework or parameter. But the inclusiveness is still missing in government documents.

Q: Do you favour a job quota for Muslims?

A: The Sachar Committee did not take a stand on reservation in jobs but looked at basic issues. There is a huge deficit in higher studies. You have to push people to go to higher levels. Something has to be done to increase the presence at the higher level. How do you do it? You have to do it through reservations. And you have to create an environment to go there. So reservation is necessary in higher education and also because public employment is awfully bad. The government has to increase job opportunities.

Q: Do you personally favour reservations?

A: Reservation is necessary to increase job opportunities for Muslims in the government sector.

Q: Can you name some states that have taken the right initiatives for Muslims?

A: I can talk about the worst.

Q: Tell us about the worst performers.

A: West Bengal is the worst – even the current government. The new chief minister, Mamata Banerjee, is following the same old policies of the left. Others are Uttar Pradesh, Maharashtra, Gujarat and Bihar. In Bihar, under the Nitish Kumar government, we are seeing some positive signals but I am still not very much convinced. He is also toying along the same political lines – Urdu medium schools for Muslims, which only leads to identity politics. In Uttar Pradesh, the issue is in planning. The Muslims were not given space in developmental activities.

A: Communists are the worst for Muslims in terms of governance. They said they would not talk about religion and they did exactly that. A small group of people controlled power. Their policy was not inclusive. But compared to Gujarat, all other states have provided security.

Q: What went wrong in Gujarat?

Q: Tell us about the states which have done well.

A: Relatively better states are Kerala [though it is bad in employment terms, it is doing well on other counts], Karnataka, Andhra Pradesh and Tamil Nadu.

Q: If you are asked to suggest in brief how to improve the lot of Muslims, what would you say?

A: It is very simple. The government has to identify sectors, departments, ministries, that are working for the masses. Ensure that those departments and ministries deliver services proportionately [to communities]. I have said if you can increase the participation of Muslims in panchayats, that alone can make a substantial change. They are hardly in panchayats and hardly get elected because panchayats are caste-based and dominant castes generally get elected. Andhra Pradesh passed a law in 2006 that in mandal panchayats, if [say] 14 members are elected, co-opt two members from minorities. Now there are at least 3,000 Muslims in the mandal panchayats in Andhra Pradesh.

Q: Has it improved the general conditions of Muslims in the state?

A: I don’t know about this but grass-roots involvement has increased among the minorities. Panchayat people know what the programme is, what kind of implementation is needed. The government should bring a law in the panchayats to co-opt the locally defined minorities. They don’t have voting rights if they are co-opted but it doesn’t matter. At least information sharing will take place. The solution is not reservations but participation. Even if no Muslim is an IAS (Indian Administrative Service) officer or minister, I don’t care, but there should be more participation at the grass-roots level.

Q: The Centre for Equity Studies and Centre for Budget and Governance Accountability have appraised the government’s performance vis-ŕ-vis the Sachar recommendations. Their findings were criticised by minority affairs minister Salman Khurshid.

A: The Centre for Equity Studies has brought out two things very clearly. It found that in the Muslim areas, they do not have proper schools. And even if schools are there, they are not run by the [Muslim] community. I have seen in Hyderabad, that a Brahmin girl is running an anganwadi centre in a purely Muslim-dominated area. She comes from 10 km away to run the centre though the rules say it has to be run by a local person.

I told Delhi chief minister Sheila Dikshit that there are 3,000 DTC (Delhi Transport Corporation) buses in the capital and 5,000 drivers: how many Muslims are drivers, as they are very technically oriented? She was shocked to find there are just three per cent Muslim drivers in the DTC. They are not included even as drivers so where will they go? You have to give space to them. Give them ownership.

(This article is excerpted from an interview published on the Governance Now website on September 22, 2011.)